Team Quebec U17 is National Champion! 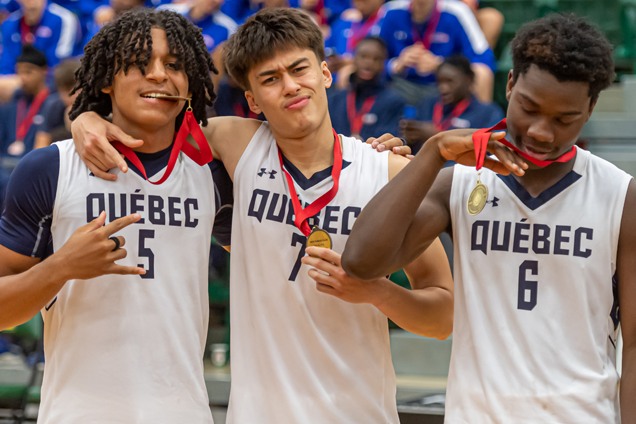 Our 17U Quebec team is the National Champions after knocking off Ontario 92-76 to win the gold medal in the men's tournament. Felix Kossaras finished with 18 points and 12 rebounds while Christopher Kumu Sheka Paraison scored 18 points to prevent Ontario from winning all four gold medals at the Men's and Women's Under 15 and 17 National Championships.

Quebec had a three-point lead after the first quarter, and managed to maintain its lead, 44-41, at the break thanks to a jump shot by Jean-Nicholas Bessette with four seconds left. 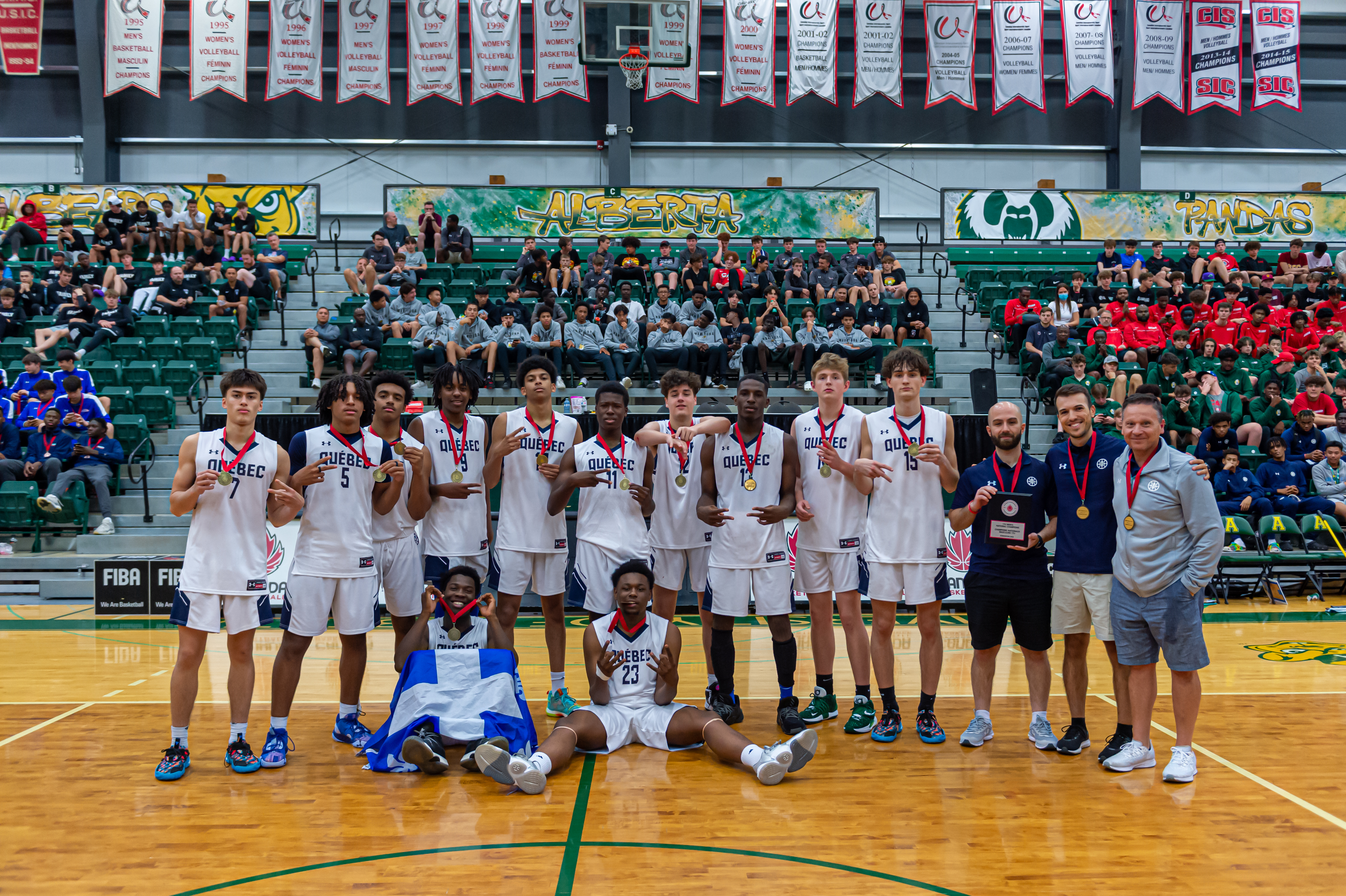 In the third quarter, Ontario tied the game several times, but could never get ahead. A dunk by Ludovic Tournier gave Quebec a nine-point lead with 1:37 left in the quarter and then Bessette hit a three-pointer to extend Quebec's lead to 12 points. Quebec started the fourth quarter with a 10-point lead, 66-56. Ontario continued to push until the final buzzer, but the team could not get closer than five points in the final quarter.

In the women's game, our Quebec 15U team won a nice bronze medal by beating Alberta 77-71 as Jahda Denis led the way with 23 points and Marie Grace Talle Makoudoum added 16 points to overcome a 27 point performance from Albertine Kira Airey. 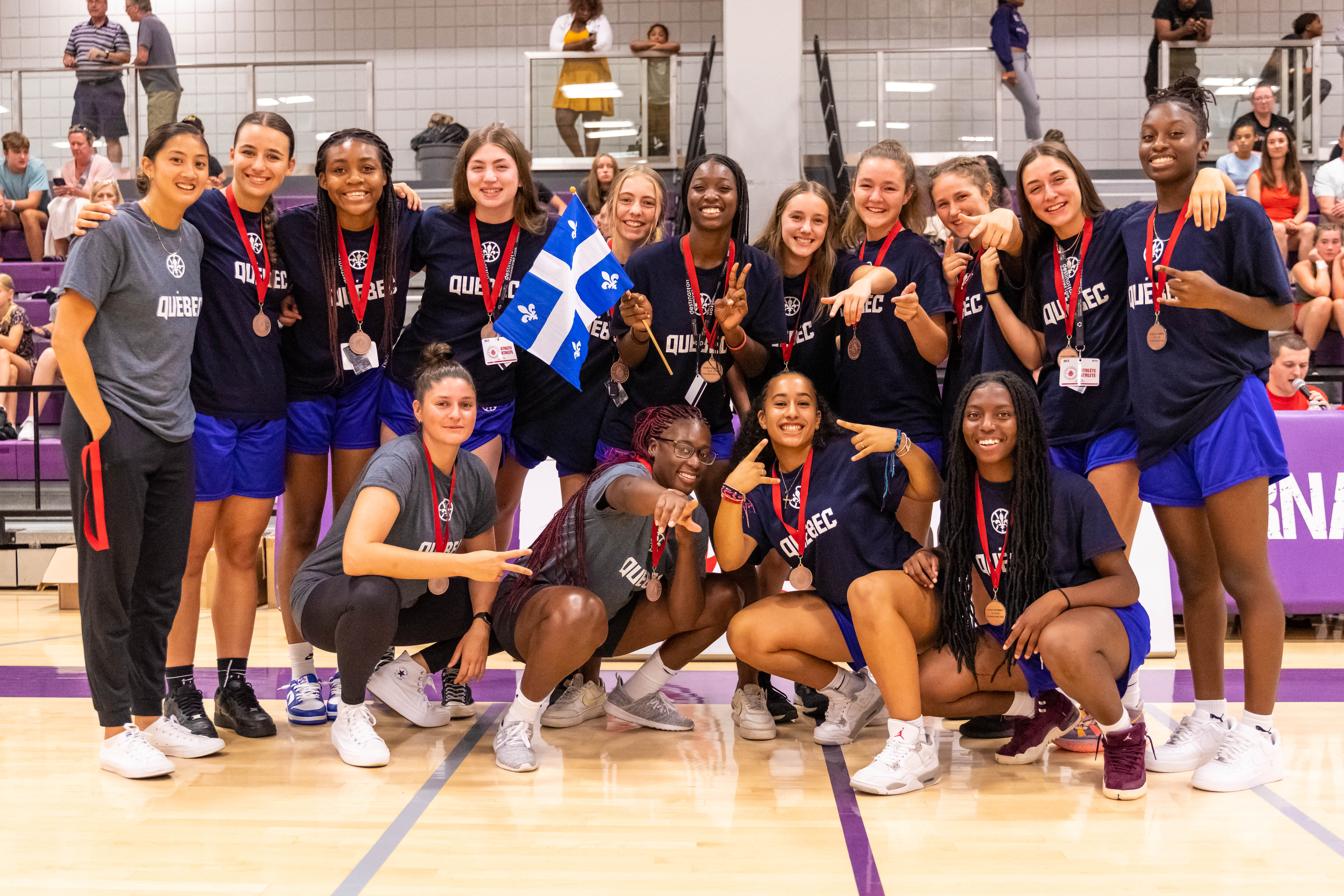 After a slow start from both sides, Quebec took a 12 point lead after the first ten minutes of play. Although it was Alberta who struck first in the second quarter, thanks to a Cameron McMaster jump shot, Quebec responded with two straight three-pointers from Frédérique Tremblay, followed by another three-pointer from Alice Veilleux to extend their lead. Quebec managed to score a 12-point run that ended on a free throw by Denis as Quebec led 32-10 at the half. Alberta finished the quarter on a high note and cut the deficit in half to go into the locker room down by 11.

To start the third quarter, both teams took turns scoring, but Alberta began to get dangerously close and were only five points behind following a jump shot by Ella Auch with eight minutes left in the quarter. From that point on, Quebec calmly ended the quarter on a 7-2 run and led by 10 points going into the fourth quarter.

Alberta continued to hang on to Quebec in the final quarter, but every time the team got close, Quebec had an answer. In the final minutes, Airey tried to come back with five straight points to pull Alberta within four points, but Quebec answered with Denis' free throw. After an Eimy Erinuugha layup for Alberta with 2:30 remaining, Denis answered with a free throw, a steal and a three-pointer to give Quebec an eight-point lead with 1:43 remaining as Alberta ran out of time to pull even.