When sport is combined with culture to show Francophone solidarity, the result is ... "Les Jeux de la Francophonie", a wonderful meeting between more than 3,000 artists and athletes from around the world.

Arts, sports and the French language

Organised every four years, in the post-Olympic year, the Games of La Francophonie invite, under the banner of friendship, the youth of the French-speaking world to meet each other through sports events and cultural competitions.

French, the common language of the countries involved, encourages dialogue between the participants and with the public. As the Olympic language, it serves the two universal languages, sport and culture, to strengthen the links created by the encounters.

1987, creation of the Games of La Francophonie

At the second summit of the Francophonie in 1987, the Heads of State and Government were seduced by the idea of creating an event where French-speaking youth would be highlighted. The decision was made to create the Games of La Francophonie.

Objectives of the Games

The Games of La Francophonie have the particularity of being hosted at least once out of two times in a developing country, thus allowing it to be showcased and giving it the opportunity to organize a large-scale event when almost all international competitions take place in Northern or "developed" countries.

A great showcase for francophone art and sport

Synonymous with encounters, openness and exchanges with other cultures and other passions, the Jeux de la Francophonie combine sports and cultural disciplines.
The choice of these disciplines is based on respect for gender parity and equality of opportunity between participants from different French-speaking countries.

Governed by the rules of the international federations, the sports events are integrated into the Federations' calendar and the results of the competitions are recorded and published.

At the cultural level, the Games represent an opportunity for young artists to showcase their work, the objective being to encourage professionals from the arts world to come to the Games to meet these talents.

The Games of Excellence and Diversity

Artists and athletes from all continents come to the Jeux de la Francophonie to compete with talent.

As a place where Francophone youth express their excellence, these Games are internationally recognized and offer these young people an opportunity to enrich, stimulate and express their vitality.

Go to the official website of the competition: CONGO 2021 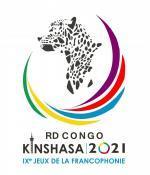